Scott Griffin publishes My Heart is Africa, A Flying Adventure 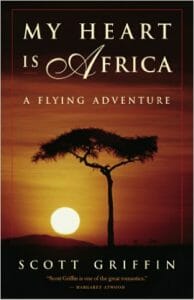 A certified pilot, Scott Griffin, decided in 1996 to break from the comfortable routine of his life to go work for the Flying Doctors Service, an African organization that flies doctors to remote areas to administer medical assistance. Griffin also made the daring decision to fly his small, single-engine Cessna 180 solo from Canada to Africa and back again. My Heart is Africa is the engaging, personal story of Griffin’s two-year aviation adventure throughout Africa.

SCOTT GRIFFIN is the Chairman and major stakeholder of two manufacturing companies and the owner of The House of Anansi Press Inc. He is Chairman and Trustee of the Griffin Trust for Excellence in Poetry and was Chancellor of Bishop’s University (2005-2013). He is on several NGO boards, including the AMREF International Board based in Nairobi, Kenya. He is married to Krystyne Griffin and has four children and seven grandchildren. All royalties from the sale of this book will be donated to the AMREF Flying Doctors Service.

Located on the roof of the Nicolls building on Bishop’s University campus, the observatory is a very recent and exciting addition to Bishop’s University. The new observatory houses a 10-inch Schmidt-Cassegrain telescope which will be used to enrich the undergraduate students’ learning experience and give the graduate students another tool with which to broaden their horizons. The new observatory will not only be used for educational purposes, but will also be open to the public for tours and stellar evenings. 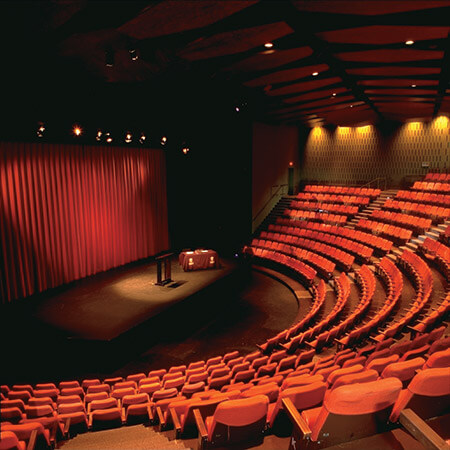 In 2006, Centennial Theatre received a $1.5 million makeover. The renovations included new seating, house lights, carpeting, and a new sound system that includes mixing boards, microphones, and lighting allowing for larger productions in the theatre. Bishop’s University is grateful to the Minister of Culture and Communications of Quebec, Heritage Canada, City of Sherbrooke, Conférence régionale des élus, the Borough of Lennoxville, Bishop’s University, and the many alumni and friends of Bishop’s who supported this project.

Centennial Theatre received the prestigious Opus Prize for Presenter of the Year 2004-05 from the Quebec Music Council. The prize is awarded to venues that offer the best selection of concert music during the year. Luce Couture, Director of Programming, received the trophy which was presented to her with the following words: A presenter is someone who knows how to take risks, who is bold, who is audacious, and who respects artists. These are some of the qualities that we find in this multidisciplinary presenter who, with her intelligent and eclectic programming, ensures the promotion of concert music.

1st Annual Research Week was held in March. Students participated in a scientific poster display every day in the Centennial Theatre Lobby. Lunch-time presentations were given by professors in the fields of astrophysics, psychology, fine arts, music, sociology, and economics, among others. Guest speakers Dr. Andrew Cohen from Carleton University and Dr. Serge Marchand from the University of Sherbrooke, contributed to promoting research through lectures on their work in their respective universities.

The Merck Frosst Centre for Therapeutic Research in Montreal donated a 400 MHz high resolution nuclear magnetic resonance (NMR) laboratory, valued in excess of $250,000, to the Chemistry Department at Bishop’s. NMR is a valuable spectroscopic technique for determining the 3-dimensional molecular structures of complex molecules, including those of pharmaceuticals, biologically important molecules, new materials, and semi-conductors. The technique uses radio frequencies to interact with the magnetic properties of various atomic nuclei to enable chemists to determine the connectivity of atoms within molecules. An especially important application of NMR in the health care field is found in the medical diagnostic technique known as magnetic resonance imaging (MRI).

The gift to Bishop’s was initiated by Dr. Deborah Nicoll-Griffith ’81, who is a Senior Director in Medicinal Chemistry at Merck’s Montreal research facility in Kirkland. The new NMR facility is the most advanced of its kind in the Eastern Townships. It will enable Bishop’s undergraduates to further experience cutting-edge research; it will promote important collaboration with the Université de Sherbrooke; and it will join new chemistry laboratory facilities for nanotechnology in playing an important role in securing additional external chemistry research funding and in promoting the development of chemistry graduate programmes at Bishop’s.

On June 2 close to 3,000 people came to Bishop’s – carrying items big and small, strange and mundane, old and new, brought by young and old alike. According to many who commented on the day, it was a tiring but enjoyable experience.

To accommodate its largest graduating class in history, Bishop’s mounted two ceremonies on June 9 (one in the morning, the other in the afternoon), both held in the gymnasium of the John H. Price Sports Centre. Receiving honorary degrees that day were former Principal Janyne Hodder, journalist Richard Gwyn, Archbishop of Québec Bruce Stavert and author Ronald Wright.

The Chapel is a worship centre not only for the students, faculty and staff of the University and Champlain College, but for the community as well. St. Mark’s is more than just a chapel; it has a rich and vibrant history and has been designated as an historical site that is a popular stop for tourist buses operating in the area. The celebration also included a reunion of the Guild of the Venerable Bede (alumni of the Faculty of Divinity) on the weekend of June 16-17. 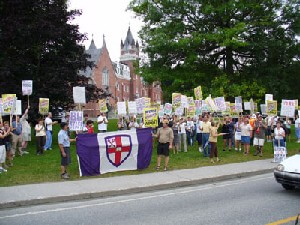 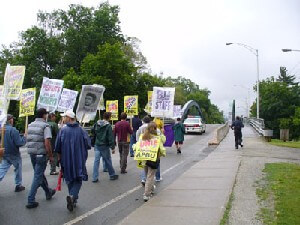 The picket lines may have been loud at times, but they were always peaceful and respectful. The majority of services on campus continued, albeit with reduced hours and services, throughout the labour conflict due to the efforts of managers and non-unionized employees. The timing of both the strike and the lockout were both made in an effort to minimize the impact on students, which, for the most part, was accomplished. 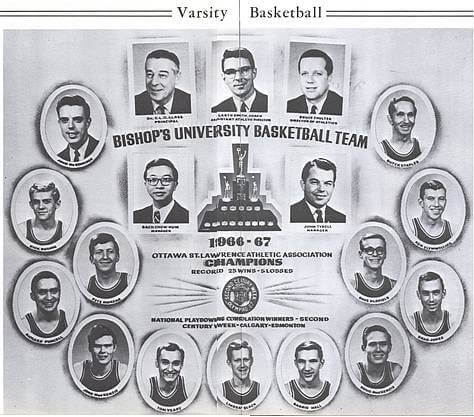 The first basketball champions at Bishop’s University, the Gaiters’ “machine” rolled through the Ottawa-St. Lawrence Athletic Association with a 15-1 record before triumphing over Ottawa and MacDonald in the league playoffs. At the CIAU Championship in Alberta, the Gaiters lost their first game, but won the last two to gain the bronze medal.

The New President of Corporation

Squee Gordon ’60, DCL ’04 says au revoir to Humber, salut to Bishop’s. Dr. Robert Gordon retired after 25 years as President of Humber Institute of Technology and Advanced Learning to become President of Bishop’s University Corporation for the next four years. 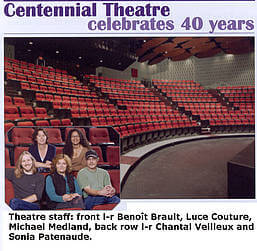 Centennial Theatre celebrates its 40th anniversary and Juno winner Holly Cole is a featured performer. The theatre, inspiration of Arthur Motyer, Professor of English and Director of Drama, was constructed to celebrate the centennial of the Canadian Confederation. It was inaugurated in January, 1967 by the Lieutenant-Governor at a special Convocation, presided over by Chancellor Douglas C. Abbott.

In 1992, with the aid of major grants from the ministère des Affaires culturelles du Québec, the lobby and the theatre offices were greatly enlarged, a gallery and artists’ centre were added, and the stage equipment was completely renovated. In 2006, on the threshold of its 40th anniversary, the university’s 575 seat auditorium received a $1.5 million makeover. The renovations include new seating, house lights, carpeting, and a new sound system that includes mixing boards, microphones, and lighting allowing for larger productions to be accommodated on campus. The renovations were made possible thanks to the generous support of the Minister of Culture and Communications of Quebec, Heritage Canada, the City of Sherbrooke, the Conférence régionale des élus, and Bishop’s University. Read more about the history of Centennial Theatre.

Bishop’s Gaiters running back Jamall Lee (Port Coquitlam, B.C. / Terry Fox S.S.) and head coach Leroy Blugh are honoured as major award winners by the Quebec University Football League. Lee was awarded the Jeff Russel Trophy, given to the league’s most outstanding player, while Blugh was named QUFL Coach of the Year. 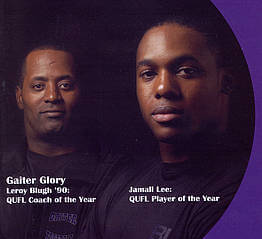 A Change in Leadership

“The past few months, in reality the last few years, have been ones of great challenge for our University. This fall several major issues (accumulated deficit, decline in enrolment, strategic direction) all came to a head….November brought change in leadership to our campus; our major challenges remain. I am happy to report, however, that the entire campus is mobilizing its efforts to tackle our challenges collectively, we need to fix the present so the future will be bright.”