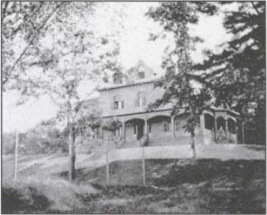 Construction of the new Principal’s residence, known as The Lodge (shown above – demolished in 1969), enabling the conversion of Old Lodge into student residences, lecture rooms and a common room. The Lodge stood up on the hill behind the current library.

The Guild of the Venerable Bede is formed to act as a bond between the past and present students of Divinity House.

Completion of the library wing behind McGreer Hall to become known as the Old Library, which originally included a stackroom and a laboratory for chemistry and physics.

Fire originating in the basement of the Library wing results in the destruction of hundreds of books as well as considerable water and structural damage.

Rev. Arthur Huffman McGreer, Bishop’s 9th Principal. Under his leadership, 1922-1947, the curriculum in Arts was greatly strengthened, teaching in experimental science was initiated, enrolment was doubled and financial stability and academic autonomy achieved.

Bishop’s College School, originally known as the junior department, or grammar school of Bishop’s College, vacates the campus to take possession of a separate site on the opposite side of the St. Francis River – the old school building is taken over by the University and renamed New Arts; the College building is henceforth known as Old Arts.

The first session of summer school for teachers is held.

The Honourable G. Howard Ferguson, High Commissioner for Canada in London, donates a ” large and very fine Cup” which is henceforward awarded every year to the student of the graduating class who has made the greatest contribution to the life of the University. 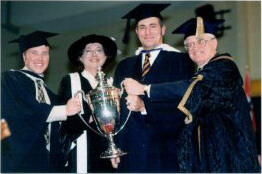 The old wooden bridge is demolished after storm damage – a new modern steel bridge is built in a different location. 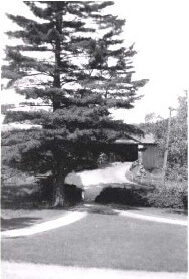 The picture above shows the road which led from Divinity House to the old covered bridge. The remains of the stone foundations of the wooden bridge on each side of the river are still visible today.

“Alma Mater”, Bishop’s new song, is published in The Mitre.

Landscaping programme is undertaken aimed at improving the appearance of the campus: the road along the river which led to the old wooden bridge is removed, telephone and hydro poles are removed and the lawns are upgraded.

Bishop’s University students travel to Western Canada as volunteers to assist with the harvest which, due to the departure of so many westerners to fight in the war, was endangered.

“In order to make possible a response to the Government’s appeal for students to help with the western harvest, lectures were cancelled from October 10 until November 4. Under the supervision of Mr. Yarrill (Professor of Modern Languages), the Bishop’s party left Montreal on the night of Sunday, October 11. Most of the Bishop’s men worked on farms in the vicinity of Olds, Alberta, some fifty miles or so form Calgary. Snow brought most of the work to an abrupt halt before the threshing was completed. By November 4 most of the harvesters had returned to the lecture room and had exchanged their pitchforks and overalls for books and academic gowns.”
The Mitre, December 1942.

First issue of the student newspaper “The Campus” is published November 10th.

The Corporation of Bishop’s University, until now under the aegis of the Church of England (Anglican) is secularized in this year, reconstituted as a non-denominational body.

Principal McGreer suddenly and mysteriously disappears in December – his body is discovered in the river in the spring of 1948. 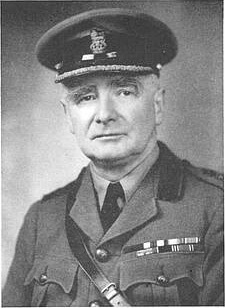 In 1947 a competition was sponsored by the Committee on Athletics and The Campus newspaper to find a nickname for the University’s Football team which would fire up the enthusiasm of the fans. The contest was won by George B. McClintock ’49 who originally suggested “Gators” after the alligator which is a “tough and formidable foe when aroused, capable of swift and decisive action in an emergency”. However, by using a play on words, the name spelled “Gaiters” seemed more appropriate for an Anglican College. Gaiters were an article of ecclesiastical clothing which covered part of the wearer’s shoes and lower legs. These were worn by Bishops (see below, Bishop Mountain, sporting his gaiters), Deans and Archdeacons as part of the clerical dress when not robed. 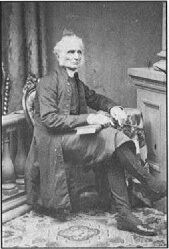 The official University Badge (bottom) was presented by the Governor General together with the Coat of Arms in 1993. In the tradition of the heraldic pun, the ‘gator is wearing his “gaiters”. 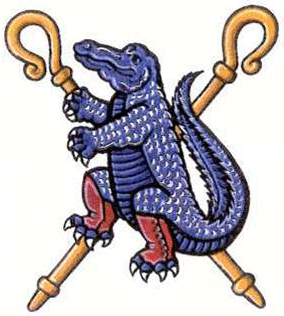 John Bassett was President of the Gazette Printing Company. He was a trustee from 1939 until 1958, and Chancellor of the University from 1950 until 1958. In politics a strong and active Conservative, he was throughout his tenure as Chancellor the University’s principal counsellor in financial matters and in relations with the Union Nationale government. In 1959, the new library building was named in memory of John Bassett (1886-1958).

The Men’s and Women’s Glee Club give their first joint performance in Bishop Williams Hall.