Golden Mitre Award was established in 1951 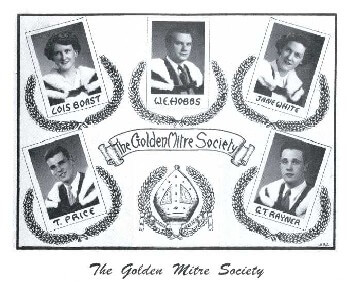 From the 1951 yearbook: “A new honour society was founded this year on the Bishop’s campus. This group to be known as the Golden Mitre Society, will have as its members five students of each graduating class who are considered by their classmates as those who have contributed the most to Bishop’s during their undergraduate years. Each student elected to the Society will receive a small pin, fashioned in the shape of a mitre and embellished with laurel.”

The Department of Business Administration is established

The first graduate from this department received his degree in 1961.

R.E.G. Duval, Professor of Business, 1958-1983, founder of the Department of Business Administration, was also a graduate of Bishop’s, 1942.

Establishment of the Department of Psychology

Bishop’s invites Dr. David D. Smith  to establish a department of Psychology, and for 3 years he remains the only Professor of Psychology. By 1970 the Department had five faculty, joint  Psychology-Biology programmes were offered for both the B.A. and the B.Sc. degrees, and substantial external research grants enabled laboratory equipment to be purchased and students to be employed as research assistants. Dr. Smith retired in 1987 after 27 years of dedicated service to his students and to the university community as a whole.

Although Bishop’s has had a rich tradition in football (beginning in 1888 with Rugby-Football), it wasn’t until the early 60’s that Principal Ogden Glass gave the University the direction Athletics needed to provide the necessary moral and financial support that ultimately shaped the modern day success of the Gaiters football program. Principal Glass hired Bruce Coulter as Director of Athletics and Head Football Coach in 1961. This hiring would help Bishop’s develop a full fledged athletic program with teams that could compete on the senior intercollegiate level.

It has been said that few appointments in the history of the university have had the impact of Bruce Coulter’s. In time, not only did Coulter produce winning teams, but he helped develop quality individuals who were great leaders on campus. Ultimately, his former players became loyal alumni who could be counted on to stay in touch with him and suggest names of potential student-athletes to be recruited to the little campus they thrived in during their undergraduate years. In 1987, Bruce retired as head football coach with a CIAU best record of most wins with 137 (his record was 137 wins, 80 losses and 3 ties). In 1991, the football stadium was re-named in his honor and the Gaiters now play on Coulter Field. In conjunction with re-naming the field, a testimonial dinner was held where 350 guests paid tribute to Bruce and his family.

Bishop’s University is featured in The Illustrated London News 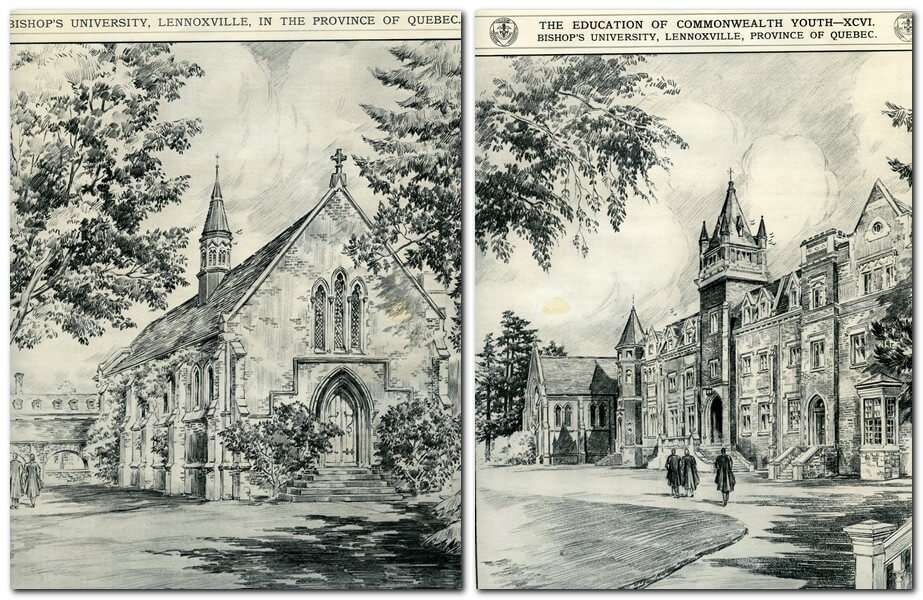 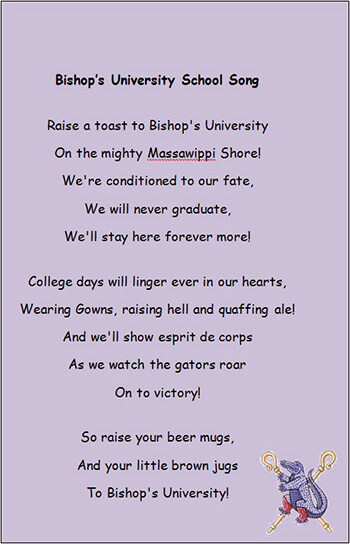 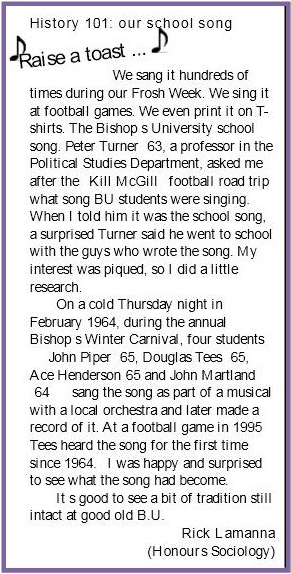 Professor Kuehner initiated the systematic study of the experimental sciences at Bishop’s. His proposal to establish an Honours programme in Chemistry was approved by Convocation in 1929, and he was promoted (Full) Professor at the age of 26. During his tenure as Vice-Principal, he was an active member of the committees which guided the rapid development of the University’s physical plant, and he served as Acting Principal during Principal Jewitt’s illness from 1957 until 1960. 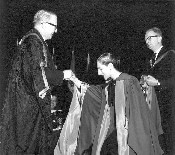 The theatre, the inspiration of Arthur Motyer, Professor of English and Director of Drama, was constructed to celebrate the centennial of the Canadian Confederation. It was inaugurated in January, 1967 by the Lieutenant-Governor at a special Convocation, presided over by Chancellor Douglas C. Abbott, at which the following six distinguished Canadian representatives of the arts received honorary degrees : Robertson Davies, author and playwright, Celia Franca, dancer and choreographer (pictured here), Jean Gascon, actor and director, Guy Roberge, Chairman, National Film Board of Canada, A.J.M. Smith, poet, and Jon Vickers, singer.

The Divinity programme is closed and the Faculty of Divinity is converted to the department of Religious Studies.

Professor Jellicoe maintained that to teach undergraduates to think, on as broad a front as the individual student can cope with, is indeed the most practical education a university can offer.

Most of McGreer Hall is leased to Champlain Regional College.

Drama is recognized as a separate department. 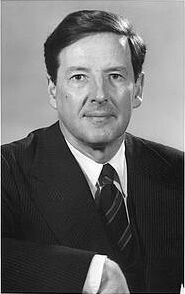 Marjorie Donald House is added to the student union building.