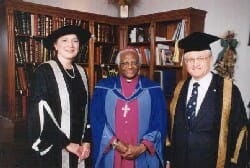 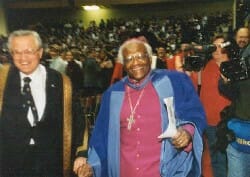 Although difficult to choose just one highlight from an event which held so many special moments, one to truly remember was Archbishop Tutu dancing down the aisle with Chancellor Alex Paterson to the strains of “When the Saints Go Marching In” – pure magic! It happened so fast and spontaneously, it was difficult to get a clear shot, but the picture shown conveys the feeling nevertheless.

On January 28, 1853, Queen Victoria decreed, by way of “royal charter” that Bishop’s College “shall be deemed and taken to be a university”, authorizing the institution to grant degrees in the arts and faculties of Divinity, Law and Medicine. One hundred and fifty years later to the very day, Canada Post honoured this event with a single domestic rate stamp, which was officially unveiled at a Special Convocation. During the ceremony, Her Excellency the Right Honourable Adrienne Clarkson, Governor General of Canada, and The Most Reverend Andrew S. Hutchison, Archbishop of Montreal and Metropolitan of the Ecclesiastical Province of Canada, received honorary degrees. A total of 3 million stamps were made available in booklets of eight. The framed document presented by Canada Post to Bishop’s University as pictured is now on display in the Old Library. 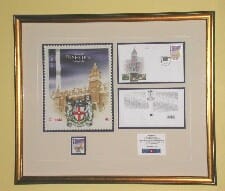 Florence May Foreman bequeaths to the Bishop’s University Foundation $4.3-million

September: Florence May Foreman bequeaths to the Bishop’s University Foundation $4.3-million, the largest single donation in the university’s 160 year history. As described by her cousin, Harry Smith, Bishop’s alumnus of 1953, miss Foreman “was a steadfast believer in the enriching contribution of teaching and research to the country and to humanity as a whole.”

The income from the trust fund created with her generous gift will be used to fund scholarships, research grants for faculty and to support the art gallery.