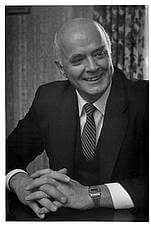 Robert A. Bandeen is appointed 15th Chancellor of Bishop’s University and remained Chancellor until 1987. The former old dining-hall and gymnasium adjoining Norton Residence was renamed Bandeen Hall in 1990, in honour of Robert and Mona Bandeen who were generous benefactors of music at Bishop’s.

Excerpt from citation delivered by Professor Robert Forrest, on the occasion of Hugh Scott receiving an honourary degree (DCL) from Bishop’s University in 1999.

Visit of His Royal Highness, Prince Philip, Duke of Edinburgh 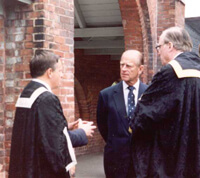 His Royal Highness the Prince Philip, Duke of Edinburgh visited Canada from May 18 to 21, 1989. Bishop’s University was one of the official stops on the itinerary which focused upon the Focused anniversary of the United Empire Loyalists Association of Canada. A civic welcome ceremony greeted His Royal Highness at Sherbrooke on May 19 at Sherbrooke’s City Hall, followed by the presentation of the The Duke of Edinburgh’s Award Gold Certificates at the Séminaire de Sherbrooke. The evening comprised a gala concert and dinner at the Domaine Saint-Laurent in Compton. On May 20, His Royal Highness proceeded to Lennoxville. A special reception was prepared at Uplands, by the Lennoxville-Ascot Historical and Museum Society, with a welcome by Lennoxville’s mayor, Duncan Bruce. Approximately 1000 people of all ages and an honour guard of 75 Second World War veterans were on hand to greet the Prince. He later visited the University of Sherbrooke, celebrating its 35th anniversary. On the same day he inspected the Bishop’s College School Cadet Corps No. 2, attended by a crowd of almost 2000. That evening His Royal Highness attended a dinner at Bishop’s University hosted by the United Empire Loyalists Association. On Sunday, May 21 at Bishop’s University His Royal Highness unveiled a plaque which commemorates the designation of St. Mark’s Chapel (1857) as a historical monument. After signing the Golden Book of Bishop’s University, Prince Philip planted a butternut sapling (an endangered species in the Eastern Townships) on the shore of the Massawippi River to symbolize the University’s commitment to the establishment of an arboretum and wildlife reserve. 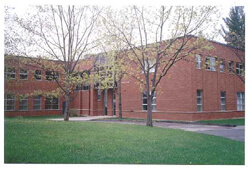 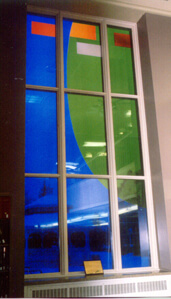 Hollywood comes to Bishop’s with actor Patrick Swayze and the Quebec premier of City of Joy shown at Centennial Theatre.

Bishop’s celebrates its 150th (Sesquicentennial) anniversary with a variety of special events.

Read Dr. Robin Burns’ introduction to the special bilingual Sesqui publication, A Portrait of Bishop’s University. Or read the book in its entirety (PDF).

The new Coat of Arms was presented to Bishop’s University by His Excellency the Right Honourable Ramon John Hnatyshyn, Governor General of Canada, at the Sesquicentennial Convocation held December 9, 1993 in Centennial Theatre. 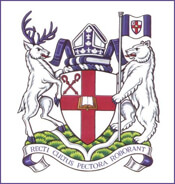 In these Arms, the Cross of St. George, the Book and the Mitre connect us with our historic roots. The crossed croziers in the first quarter symbolize our relationship with the Bishops of Montreal and Québec. The crest stands on a compartment representing the St. Francis and the Massawippi Rivers flowing through the green hills of the Eastern Townships. The supporters stand for the white-tailed deer and the black bear, both animals native to this area.

The motto featured on the coat of arms,  Recti cultus pectora roborant, has been translated as Sound learning strengthens the spirit.

The badge consists of crossed croziers behind a purple alligator wearing red bishop’s gaiters – an heraldic pun in the ancient tradition. The badge can be used for less formal purposes, such as team uniforms, beer mugs, banners etc.

The official University flag includes a representation of the basic crest, on a silver background with purple bands.

Sherry reception for the Governor-General in the Old Library.

Chancellor William Turner is presented with the University’s Letters Patent by Governor-General Ramon John Hnatyshyn, at a Special Convocation held December 9th, 1993, celebrating the 150th anniversary of the founding of Bishop’s University.

The Governor-General is presented with a Bishop’s Gaiters football sweatshirt.

Born in Guelph in 1958, Andrew Paul MacDonald earned a DMA in Composition at The University of Michigan in 1985. For the past decade his compositions have won many prestigious prizes, including the 1995 Juno Award for “Best Classical Composition” for his Violin Concerto. His works are regularly performed in North America and Europe and are frequently broadcast on CBC and SRC. The release of his Prophecy from 47 Ursae Majoris on the Gasparo label marked the eighth compact disc recording of his music, and his compositions are published by New Art Music Editions (Winnipeg) and Vierdreiunddreissig Musikverlag (Munich). Dr MacDonald is also active as a concert guitarist and as professor of composition and theory at Bishop’s. 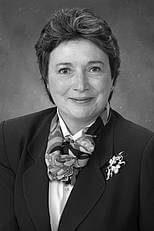 She served until 2004 and received an honourary degree (honoris causa – DCL) from Bishop’s in 2007. Read citation for Janyne M. Hodder (PDF).

David A. Williams donated the largest single gift to date (1996) in Bishop’s history

David A. Williams (Bishop’s ’63, DCL ’96), successful investment manager and generous philanthropist, donated the largest single gift to date (1996) in Bishop’s history. He has created the SEED Foundation (Success through Education, Enterprise and Determination) with a donation of $3,000,000. His Foundation exists for the benefit of the Division of Business Administration of Bishop’s University. The gift will provide scholarships and bursaries for students, establish faculty positions, introduce an International Executives-in-Residence program, and provide travel grants to students and faculty in the International Business Program.

Inauguration of the Williams School of Business and Economics.