Discovery of a Giant Planet Orbiting a White Dwarf 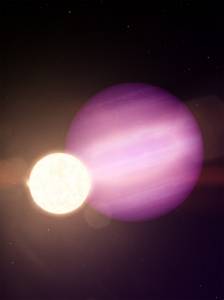 Dr. Lorne Nelson of the Physics and Astronomy department was part of an international team that discovered the first planet to orbit the burned-out core of its parent star. The observations and analysis were published in Nature, which is considered to be the world’s premier science journal.

The planet known as WD 1856b was discovered using NASA’s TESS space telescope and it makes one complete orbit in an incredibly short 34 hours! As Professor Nelson explains: “This is a truly remarkable discovery because what we have found is a giant planet that is about the same size as Jupiter but that is in a very close orbit with a white dwarf which itself is the burned-out core of the parent star. The big surprise is that the planet survived the death of its parent star and then somehow migrated inwards very close to the white dwarf core.”

After the initial observations were taken, it became apparent that WD 1856b could only be one of three things: a giant planet; a brown dwarf; or a red dwarf. Red dwarfs are the smallest of the stars and brown dwarfs are the missing link between giant gas planets such as Jupiter and the smallest stars such as red dwarfs. Using Professor Nelson’s computer-generated models of brown dwarfs and red dwarfs in combination with infrared observations from the Spitzer space telescope, they determined that the object was indeed a giant planet that likely had not been engulfed by the parent star when it expanded to become a red giant during the last stages of its life.

These contributions to the discovery could not have been made without many years of work needed to develop the theory and generate the models. Several former Bishop’s students have made invaluable contributions to this effort. Chief among them is Jonas Goliasch who completed his Bachelor’s degree in Business and Physics and continued on to finish his MSc. He now teaches at Bishop’s and Champlain CEGEP. Others include Ernie Dubeau who completed his BSc (Honours) and MSc at Bishop’s and now is a tenured professor at Champlain, and Florian Maisonneuve (MSc) and Heather Nangreaves (BSc) who generated many of the models of brown dwarfs and giant planets.

Our own Sun will also expand to become a red giant in about 5 billion years. It will engulf Mercury, then Venus, and likely the Earth. But what will happen to Jupiter and the other giant planets in our solar system? Discoveries such as WD1856b will guide us to the answer and help us understand the underlying physical principles.