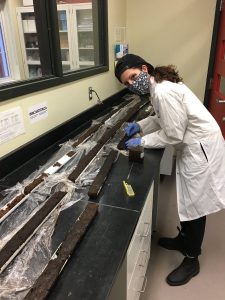 Jessica Lapenna is majoring in Environmental Science, and recently presented her Honours proposal Fire history of the Magdalen Islands during the Common Era (i.e., the last 2000 years). For this research project, the first ever study attempting to document long-term fire frequency on the Magdalen Islands, she is working under the supervision of Dr. Matthew Peros of the Department of Environment and Geography, and Canada Research Chair in Climate and Environmental Change, as well as Dr. Jeannine St-Jacques of Concordia University.

Jessica is studying core samples from a peatland on the Magdalen Islands, located in the Gulf of St. Lawrence, a region that is rapidly experiencing some of the fastest warming of sea surface temperatures anywhere on the globe. A core sample is a long cylindrical section of soil collected in the peatland. When looking at a core, from top to bottom, the soil is increasingly old and provides information on the history of events in the peatland and surrounding environment, allowing the researcher to study variations in climate, vegetation, and hydrologic conditions over hundreds and even thousands of years.

After collecting the core samples, the next step was to date them. This can be done in many ways, but Jessica’s samples are being dated using radiocarbon dating, a method providing age estimates by measuring the decay in carbon-14 from dead organisms, like plants and animals that once lived on the peat surface. Then, in order to investigate past fire activity, Jessica is searching for microscopic charcoal particles in her samples, which indicate local fire events in the peatland, and use the presence of the charcoal particle down the length of the core to determine when fires happened in the peatland. She will also correlate the number and size of charcoal particles with the magnitude of the fire; more charcoal often indicating a more intense fire.

Jessica’s research will be ongoing this winter semester and it is unclear what her findings will show, but she is hypothesizing that climate events during the Common Era, such as the Medieval Warm Period and the Little Ice Age, would have affected the fire regime on the island. Stay tuned to find out what she uncovers!

“Ultimately, peat bog fires are now understood to be more important and common than previously thought, and understanding variations in fire events is important for determining the resilience of a peatland’s carbon stock and future greenhouse gas budget. However, there is a research gap in relation to the long-term fire history of peatland environments, especially in small island settings,” says Jessica on the importance of her research. Her results have important implications for understanding the role of fires and the input of carbon into the atmosphere from peatland environments.

To stay up to date with the research of Dr. Matthew Peros’s team, follow him on Twitter @PerosLab.