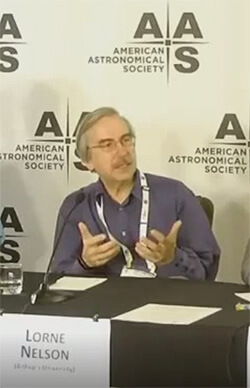 An international team of astronomers, including Dr. Lorne Nelson of the Physics & Astronomy Department at Bishop’s University, have discovered a rare gem: A binary system consisting of a failed star, also known as a brown dwarf, and the remnant of a dead star known as a white dwarf.

Using data collected from the Observatoire astronomique du Mont-Mégantic, among other sources, they have identified a binary system consisting of a failed star (a brown dwarf) and the remnant of a dead star (a white dwarf). In sum, binary systems occur when two stars coexist in close proximity to one another and are bound to one another by gravity. What makes this find particularly remarkable is the fact that these stars orbit each other at a speed of approximately 100 km/second (a speed that would allow you to cross the Atlantic Ocean in less than a minute!). As announced by Dr. Nelson at a press conference held at a meeting of the American Astronomical Society in Austin, Texas earlier this month, he and his team created a model for this binary system that demonstrates how, in less than 250 million years (an exceptionally short timeframe in the field of astronomy and cosmology), the brown dwarf will come to be cannibalized by its white dwarf neighbor, which would make this particular system completely unique among the binary systems observed by researchers thus far. Dr. Nelson has submitted a paper outlining his research, co-authored by Bishop’s University graduate Jonathan St-Antoine and Bishop’s University student Matthew Lundy, to the Monthly Notices of the Royal Astronomical Society.

If you wish to learn more about this important discovery, please see the press release that has been issued by Bishop’s University.  Readers of French may also read about this discovery in La Tribune.