Professor Michael Royea of the Department of Classical Studies has recently published The Key of Theseus with TouchPoint Press. The Key of Theseus is a work of fiction that draws upon Professor Royea’s fields of academic interest: archaeology and history. 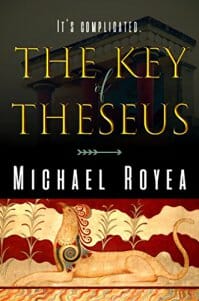 From the book jacket:

“Benny Shay, an archaeologist, arrives on Crete to authenticate an ancient Minoan artifact supposedly discovered by a tomb robber. Within twenty four hours of arriving, the tomb robber is murdered, Benny’s friend and financial supporter is killed in a car accident, and Benny is being followed. After hiring a tour guide, Tara, who believes Benny is searching for treasure, the two discover a Minoan tomb with an inscription that leads them to the Minoan palace of Phaistos. Here they find a system of tunnels under the site that ends at a secret room where they discover a gold bull pendant.

Following a series of clues they begin to believe the pendant is the mythical key of Theseus that opens the treasury of King Minos. They deduce the treasury must be in the labyrinth under the Palace of Knossos, home of Minos, and the Minotaur. But others seek the prize …”

Michael Royea has taught in the Classics Department at Bishop’s University since 1995. He has created a Minor in Archaeology and introduced a number of undergraduate travel courses, first to the American southwest and then to Greece. He is also the author of The Grand Circle Tour: A Travel and Reference Guide to the American Southwest and the Ancient Peoples of the Colorado Plateau, published in 2014 by W.W. Norton & Company.