Being a student-athlete means a lot more than just balancing school and sports. It embodies life lessons on team spirit, commitment, and time management. But life doesn’t always go as planned. When a fluke accident caused Bishop’s star lacrosse player Chris Lesanko to become quadriplegic with an incomplete spinal cord injury in 2005, he turned around with renewed purpose to make a difference in both his life and those around him. Founding the First Steps Wellness Centre in Regina, Lesanko is a true testament to the importance of recognizing potential, not limits.

Owning a gym had been a long-time dream of Lesanko’s. “I was always doing exercise and fitness. I had two older brothers, so they got me into It when I was very young,” he remembers. “When my injury happened in 2005, it put me a through a little bit of a mindset check.” Determined to get back on his feet, Lesanko quickly found that good treatment for people in his situation were very minimal and he felt there was little hope. That’s when he discovered Project Walk in California. “I enrolled there a year after my injury, and it opened up my eyes,” he explains. With rigorous treatment and work, he went from being paralyzed from the neck down to regaining the mobility to move both his arms and get himself around in a manual wheelchair. This renewed hope sparked his mission to open the First Steps Wellness Centre.

Specializing in rehabilitation for people with neuro-muscular disorders and helping clients regain function through the use of leading-edge intensive exercise-based rehabilitation programs, the First Steps Wellness Centre’s slogan quickly became recognize potential, not limits. “You never know what somebody’s potential could be,” says Lesanko. “If you ask anyone around the facility, everyone is kind of compliant when they first get hurt. Then they come to the centre and it just opens up their eyes to knowing how much more they can achieve and can do.” 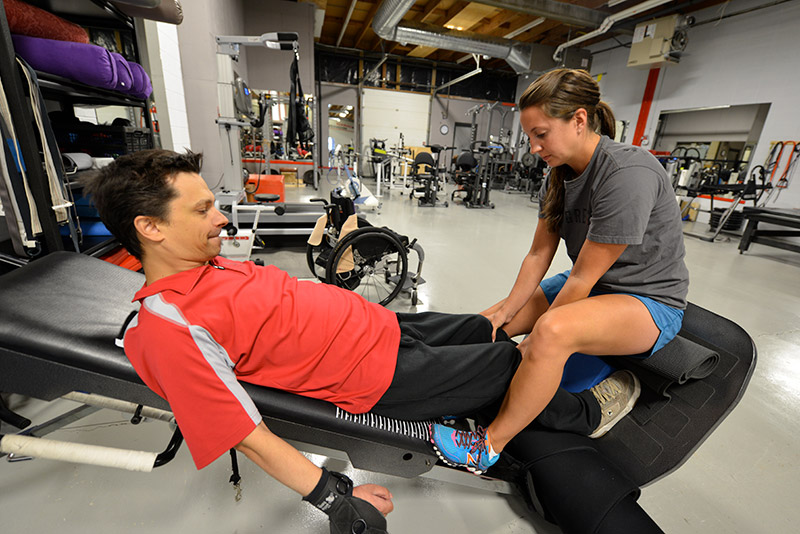 Back in 2005, just three days before Lesanko’s life was flipped upside down, votes had been cast for Bishop’s Men’s Athlete of the Year. He became the first lacrosse player to win the prestigious award. Lesanko continues to be involved in lacrosse now more than ever. When he isn’t at the centre, he’s busy working for the Saskatchewan Lacrosse Association, being a casual lacrosse program coordinator for Standing Buffalo Lacrosse, acting as Commissioner of the Prairie Gold Lacrosse League, as well as sitting on the Regina Field Lacrosse Board.

Lesanko’s involvement in sport doesn’t end there. Every year, he holds a golf tournament to raise funds for his rehabilitation. “Even though I founded First Steps, I still have to pay to go to First Steps as it’s a non-profit organization. We really rely on client fees to stay open and operating, and we provide the best rates we can for them,” he explains. Last year, one of the board members challenged Lesanko to swing a golf club. “At first, I thought it was impossible, but with technology now they have golf carts that actually seat up. Through quite a bit of training all winter, I got my technique down and then I actually tee’d off and did the opening drive at my last year’s golf tournament.” Though this year’s tournament happened quite differently with the pandemic, “it was pretty awesome, to say the least.” Golfing from their nearest golf course, 8 teams joined in virtually from both the US and Canada. “We actually had an alumni team from Bishop’s that golfed in Montreal,” he shares.

Bishop’s was the last of leg Lesanko’s journey as a student-athlete. “My first year I went to college in Vermont on a NCAA lacrosse scholarship, then I went to the University of Regina, and then I went on to Bishop’s. Between the three schools, Bishop’s was the most comforting, and had that sense of welcoming amongst everybody – the teachers, the students, and my teammates.” The sense of community that Lesanko felt was only amplified when he was injured. “My teammates came to the hospital. I was in a French speaking hospital and I knew three words of the language, so just having that comfort there until my parents and family came over speaks to what Bishop’s is. It’s a tight-knit community, close and supportive. Everyone is there to help out each other.” Though his injury set back is original graduation date set for 2006 or 2007, Lesanko persevered with the same determination that has pushed him in all aspects of his life and obtained his diploma from Bishop’s in 2017.