Bishop’s University raises $40.5 million in its most successful fundraising campaign ever

Bishop’s University announced today the results of the most successful fundraising campaign in its 174-year history.

The Leading the Way Campaign was launched in 2012 with a target of $30 million. Having achieved its objective one year ahead of schedule, the goal was raised to $36 million. As of today, the Campaign has raised $40.5 million in philanthropic donations.

“I would like to express my profound gratitude to the donors and volunteers who have contributed to the campaign over the past five years,” said Tim Griffin, Co-Chair of the Campaign.

“As a proud alumnus, I am very grateful to all of our supporters who have invested in making one of Canada’s top undergraduate universities even better.

”The one million dollars contributed by the students and the 80% participation rate by faculty and staff, which is one of the highest participation rates for any university in Canada, are a testament to our community’s profound commitment to Bishop’s.”

The money raised will have a significant, long-term impact on several aspects of the University.

It will fund the following initiatives in perpetuity:

In addition to the $40.5 million raised through the Campaign, the University’s Annual Fundraising campaigns have raised $5.8 million since 2012.

Based on these results, the Quebec government has provided $5.6 million in matching funds since 2012, which means that Bishop’s fundraising efforts have generated $51.9 million over the last five years.

As well, during the same period there has been significant investment in infrastructure at Bishop’s. The federal, provincial and municipal governments provided an additional $57 million to:

This adds up to more than $100 million in investments in Bishop’s from private and public sources since 2012.

“We are very grateful for the broad support we received for the Leading the Way Campaign,” said Principal Michael Goldbloom, C.M. “The campaign benefitted from major gifts from donors like Wally Denver ’61, John Donald ’61, Robert Goldberger ‘79, Scott Griffin ‘60, Richard Tomlinson ’43, the Jarislowsky Foundation, the Joyce Family Foundation, The Molson Foundation, the Webster Family and Foundations, and many Quebec companies and national financial institutions. 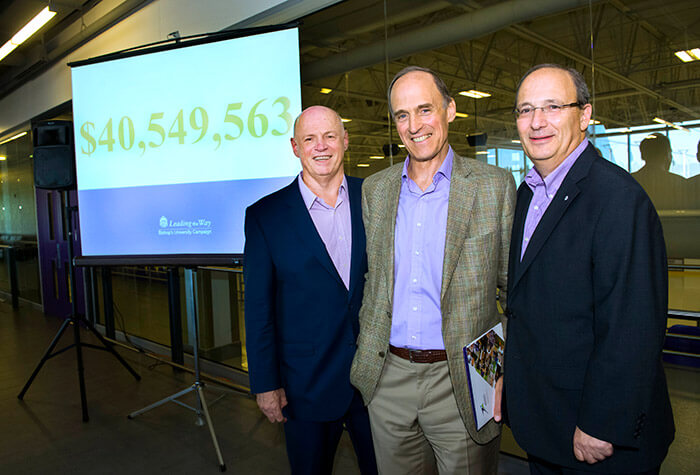 Bishop’s is continuing to invite donors to contribute to a variety of initiatives including the modernization of the library and the revitalization of its residences. The final tally of donations will be completed on March 14, 2018.

Co-Chair Daniel Fournier, said that: “Raising $40 million is a great achievement and eloquent testimony to the high respect for Bishop’s. When you put this together with the increase of $4 million in annual funding by the Ministry of Higher Education and the fact that Bishop’s students rate their experiences as the best in Canada you have a virtuous circle which confirms that Bishop’s has great momentum to pursue its goal of providing the best undergraduate education in Canada.”

Bishop’s previous capital campaign was completed in 2003 and raised $18 million.

Bishop’s University, which was founded in 1843, is a predominantly residential, undergraduate university in Sherbrooke, Quebec. It provides a high quality education in the humanities, natural sciences, social sciences, business, and education. Its small size (2,400 full time students) allows students to develop close relationships with their professors and each other.