The Department of English is pleased to recognize faculty achievements in a wide variety of scholarly activities.

Mr. Chad Gibbs has a stellar teaching record, as evidenced by the fact that he has garnered several teaching awards and nominations. These include nominations for the Regional Emmy in the category of Best Sports Special (1988), the Utah Broadcasters Gold Awards for the category of Best Sports Special (1988), and the Turner Teaching Award (2011). He won the Bishop’s University SRC Divisional Teaching Award (Humanities) in 2011.

Dr. Claire Grogan won the Faculty Evaluation Committee Merit award for Research/Teaching in 2006 and then again in 2012.

Dr. Linda Morra won the SRC Divisional Teaching Award (Humanities) in 2010 and was nominated for the William and Nancy Turner Award in 2011. She was awarded the Faculty Evaluation Committee Merit Award for Research/Teaching in 2010 and then again in 2013.

Dr. Jessica Riddell is the youngest ever recipient of the 3M national Teaching Fellowship, the highest national recognition for excellence in university teaching and educational leadership. She has also been nominated for the William and Nancy Turner Award at Bishop’s University three times, first in 2011, winning the award in 2012, and nominated again in 2013. This is the most prestigious teaching award at Bishop’s University. She also won the Faculty Evaluation Committee Merit Award for Research/Teaching in 2012.

Dr. Gregory Brophy published “Gothic Optics and Impressionable Minds in Richard Marsh’s The Beetle,” as part of a collection of essays titled, Monstrous Media (Manchester UP 2012) and “The Sphygmograph: Pros-theses on the Body” with Victorian Review in the fall of 2009.

Dr. Claire Grogan edited a version of Thomas Paine’s The Rights of Man, which was published by Broadview in 2011, and Politics and Genre in the works of Elizabeth Hamilton, 1756-1816, which was published by Ashgate in 2012. The latter was reviewed in The Times Literary Supplement, which applauded how Dr. Grogan “challenges orthodox literary history” to show that accepted socio-political categories “elide important complexities in the literature producing the revolutionary period.” Her chapter on Jane Austen and the Television Series “Lost in Austen” appeared in Popular Culture and the Eighteenth Century (University of Toronto Press, 2012). 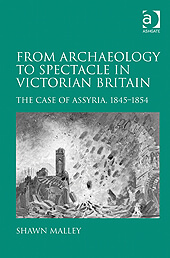 Dr. Shawn Malley published his book, From Archaeology to Spectacle in Victorian Britain: The Case of Assyria, 1845-1854, with Ashgate in 2012. This book was nominated for both the Modern Languages Prize for First Book and the North American Victorian Studies Association prize for Best Book of the Year. Addressing the history of Britain’s imperial investment in Mesopotamia, From Archaeology to Spectacle was praised by scholar Robert Aguirre for showing “how artifacts resonated within and without the gallery walls”: “The result is an entirely new history of the present, patiently constructed from archival shards and the forgotten fragments of history.” 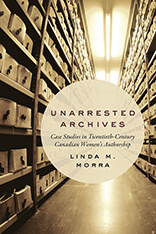 Dr. Linda Morra published Unarrested Archives: Case Studies in Twentieth-Century Canadian Women’s Authorship (University of Toronto Press, December 2014). This book, provides a comprehensive look at the socio-political impacts driving archival practices as relating to the works of five women writers. Through her critical analysis of the treatment of the Canadian national literary identity, race, gender, and sexual orientation, Dr. Morra looks at the means and motives behind the ways these female authors protected their work in the public record.

She was awarded a SSHRC Standard Research Grant (2006-2009) and then the FQRSC (2009-2012) to work on her book, Unarrested Archives: Case Studies in Twentieth-Century Women’s Authorship (December 2014, UTP). With Laura Davis, she was awarded a SSHRC Insight Development Grant (2013-2015) to work on Margaret Laurence and Jack McClelland: The Development of Canadian Literature in Letters. She co-edited Basements and Attics, Closets and Cyberspace: Explorations in Canadian Women’s Archives (WLUP 2012), and produced an edition of of Jane Rule’s Taking My Life with Talon in 2011. Taking My Life was shortlisted for the LAMBDA Award (2011) and nominated for the Stonewall Book Award (2011).

Dr. Jessica Riddell was awarded a SSHRC Insight Grant (2011-2017) for her book Gender, Genre, and Crisis in Elizabethan Performance. She has co-edited four edited collections celebrating undergraduate research as QUEUC proceedings from 2012 – 2015. Recently articles include “Performance, Feedback, and Revision: The Potential for Transformative Experiences in Undergraduate Essay Writing.” Collected Essays in Learning and Teaching (CELT; June 2015) and an article under development titled “Putting Transformative learning On Trial: Shakespeare’s Authorship Question in the Undergraduate Classroom”. Dr. Riddell also has a series of articles published and forthcoming with colleagues, including a collaborative writing group article called “Leading Up: Creating change in SoTL via Leadership.” Canadian Journal of the Scholarship of Teaching and Learning (CJSoTL, forthcoming Spring 2017); and with Dr. Corinne Haigh (Bishop’s University), “Preaching What We Practice: How Institutional Culture Supports Quality Teaching.” Journal of the Eastern Townships (JETS). Issue 44. Spring 2015. Dr. Riddell is currently editing a collection of essays on Parenthood in the Professoriate with Drs. Danielle Bobker and Rachel Berger (Concordia University) and co-writing a book on Shakespeare in the classroom with Drs. Shannon Murray (UPEI) and Lisa Dickson (UNBC).

Dr. Steven Woodward’s recent publications include an essay on the Harry Potter films and an edited book, After Kieslowski: The Legacy of Krzysztof Kieslowski, that considers the enduring effects that the work of the long-deceased filmmaker continues to have on recent generations of filmmakers. Other published essays address such subjects as the Lord of the Rings trilogy, the James Bond film franchise, and the films of Roman Polanski. He is currently completing the co-editing of a book of interviews with Krzysztof Kieslowski.